A helicopter trip to the Mutnovsky volcano 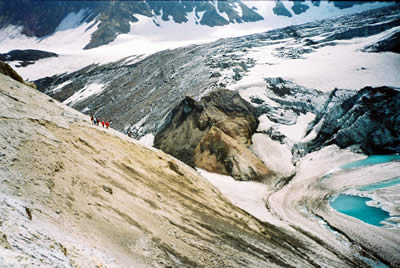 The group is taken by helicopter to the Mutnovky volcano, which is located 70 km to the south of Petropavlovsk-kamchatsky. There is a landing at the height of 1400 m, then a 3-hour walking tour to the crater of the Mutnovskiy volcano. The volcano is made up of 4 interlocked cones, one of which, a very new one, is the eastern cone and its peak is the highest point (2323 m). On the western slope there are two partially overlapping craters, which remind a figure 8. There was an eruption in one of them in year 2000, as a result of which a new crater formed next to the famous crater «active funnel”; on its bottom a blue lake can now be seen. On the bottom and the walls of the old crater one can now see steam and gas streams, the outlets of which are marked with volcanic sulphur. Over some of them one can see sulphur domes up to 2.5 m in height and up to 5 m in diameter. The river Vulkannaya, which cuts through the bottom and the western wals of the north crater, forms an 80-m high waterfall on the outlet, and below it a deep canyon – the Opasniy ravine – is now in formation.

Mutnovskiy Volcano presents a whole number of different volcanic phenomena, the visit to this place can only be compared to a trip to the Valley of geysers.

The cost includes: transportation, services of a guide, an outdoor picnic.

The flight to the beginning of the tour begins from the Avachinskiy airport (from the city of Elizovo), which is located in 30 km from Petropavlovsk-Kamchatsky.